Home NEWS Rihanna Confirms Her Next Album Will Arrive In 2019

By now, the running joke surrounding the whereabouts of Rihanna‘s album is just as common as those “come to Brazil” queries found in your favorite artist’s comment section.

While she was taking to her Instagram stories to relay her slight exasperation with the onslaught of questions, she was also sliding into the comments on her page to answer the burning question, confirming that her ninth studio album would indeed be arriving in 2019. 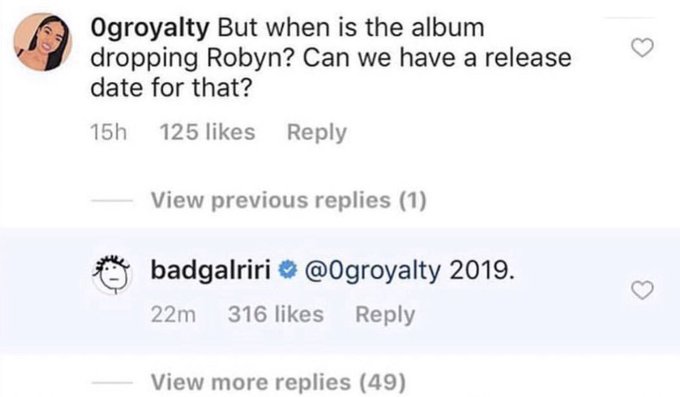 It’s yet another step closer to the long-awaited effort. Earlier in the week, Rih’s vocal producer Kuk Harrell decided to tease the effort during an Instagram Live session by answering fans questions about the project, telling them, “R9 is great. R9 is amazing. It’s incredible, And that’s all I’m going to say.”

While the camp has not offered much else on the project, Rihanna did previously reveal that her next album would be a reggae output in an interview with Vogue, where Chioma Nnandi wrote that the effort could very well draw influence from producer Supa Dups, who has notably worked with the likes of Beenie Man, Elephant Man and Sean Paul. It’ll be a full circle return to the island roots from which Rihanna hails and the same sounds that first thrust her into the spotlight with a debut that was underscored by cuts like “Pon de Replay and “If It’s Lovin’ That You Want.”